The other day I shared my hobby of painting.

I am sort of an Arts and Crafts kind of girl. Sometimes. 😉

In my early twenties, a girl friend who shares my love for creating stuff, gifted me an afternoon craft class. It was a voucher for both of us to attend, and we got wine and snacks! 😉 I remember it as being loads of fun – but somewhat frustrating too – and it wasn’t the wine 😛

It was a class in ‘serviette glass decoupage’.

Now back in those days, I was nowhere near as patient as I am now. And it showed in that class (hence the frustrating part of it).

We arrived twenty minutes early, and were greeted with a variety of wines to choose from. The studio the class was being held at had a beautiful garden, and I remember sitting on the grass with our wine, next to a small rock fountain, just sunning ourselves. No words passed between us, we just were. It was bliss.

We were ushered inside a while later by the hostess – an elderly woman with long gray hair, dressed in a brightly coloured kaftan, sporting a glass of wine twice the size of ours! (A couple of months ago, I watched the series Grace and Frankie.When I saw Frankie, I was instantly reminded of the teacher we had that day 😉 Frankie is the lady on the right, pictured below)

I’m struggling to remember what our hostesses name was, so for the purposes of my story, I shall refer to her as Frankie 😉

My friend, Tish, and I took our seats, and I was excited to see the box of supplies in front of me. Frankie took her place at the front of the room and rather dramatically announced,
”Ladies, today we are going to test our patience!”
I wasn’t the only one who wore a horrified expression, promise.
She laughed, and added, ”We’re going to create something beautiful that you can be proud of.”
We all relaxed – but we should have known that she was an honest woman (she gave us wine, after all) and wasn’t actually kidding about the first part despite her laughing after she said it.

As we unpacked our items, I got more excited, while she talked us through a brief explanation.
”First we will tear the mulberry paper into small pieces, and you will use the normal paintbrush to ‘glue’ the pieces to your jar with the glaze I have provided. (It’s a water based glaze type varnish, thin and colourless, and after this class I preferred working with it to working with the traditional modge podge that is usually used in decoupage.)
When you have finished, while your jar is drying – it will take about fifteen minutes to dry, you may come and select a serviette from the box. Then you will cut out your picture and gently apply it with the softer paintbrush to your bottle, using fine strokes to pretty much paint it on.”

It didn’t sound too difficult.

There was a lot of chatter as we got busy with our jars (we’re women, after all 😛 ), and Frankie made her rounds to check on us and top up our wine. Such a good woman 😉

What she had failed to tell us was exactly what our serviette time would entail.

I don’t remember who waited for who, but when Tish and I were both done, we went to the serviette box together. Tish selected a serviette with bright flowers, I went with something softer – pale seashells.

Seeing us returning to our work stations with our serviettes, Frankie came over, with prestik?!?!?! What followed was a true test of patience. And I blame my youth back then for my lack thereof 😛

The serviettes had three layers, which made them ‘firm’. We were to only work with one very delicate and easy-to-tear layer. The prestik was to assist in separating the layers. Once we had the final thin layer, we could pick up our scissors, and very gently begin to cut out our chosen sections.
Now, I need to tell you, for some reason I struggle a little with ‘gentle’. I am not a bull in a china shop by any means, but I am also not a very soft and gentle worker with my hands. I’ve improved… but back then it was an almost disaster.

I went through three serviettes before I had my few shells! The more intricate the cutting pattern (Tish learnt the hard way with her petals) the easier it is to tear the serviette while cutting. By the time we were done, I am pretty sure our sighs of relief could be heard in other countries. We high-fived each other, because, well, the bad part was over.

And then Frankie reappeared, her sample in hand. She showed us how to very carefully apply the serviette with the soft brush. As with most things when people do them who know what they are doing, she made it look easy.

I can assure you, it’s not. A single delicate layer of serviette that becomes wet tears really easily at the slightest amount of ‘too much pressure’. And so we were back to square one, fetching another serviette and holding scissors.

It took FIVE HOURS to make one jar! Some ladies gave up, and Frankie did theirs for them in the end, showing them how as she went along – for future use. I wonder if they ever tried again?

Tish and I were part of the determined group. And we finally succeeded!

So this was my very first jar, made with serviette decoupage…

I have since, after many years of practice, managed to hone my skill so that it’s a lot less frustrating… and I don’t tear as many serviettes anymore either 😉 It helps that I am older now, I think – so my ‘patience skill’ has been honed too 😛

In fact, I actually now enjoy working with the serviettes, and even use them for decoupage on wooden items. 😉 I made butterfly coasters for a friend for her birthday, I made a flower fairy tissue box for someone else. And I’ve done a few bottles as gifts, with some form of something in the neck to add to the decor – a fake flower, or greenery etc.

So without further ado, I’ll share more pictures with you 😉

And if your patience isn’t already being tested, you might want to try some serviette decoupage to get it started 😛 😉

My maternal Granny was an artist. Apart from also being an amazing piano player, knitting and crocheting beautiful blankets and jerseys for us grandchildren, baking the best cheese scones I have ever tasted, a Scrabble Queen, and a poet – she wrote some amazing poetry!
She was an extremely talented individual. 😉
Her paintings were often shown at local art exhibitions, and she even managed to sell quite a few. She was brilliant with both watercolours, and oils.

I often think that my small abilities/talents in all these areas (nowhere near as great as hers were!) have a lot to do with her. Because Granny was the one who taught me to knit. When I expressed such love for her scones, she taught me to make them – but mine have never tasted as good as hers did 😉 She included me in her and Grampie’s games of Scrabble – I eventually beat my much older brothers. When she was typing on her old typewriter, I would be sitting reading her poems – and sometimes she would take a break and explain to me the things I didn’t quite understand.
The smell of oil paints was a favourite for me as a child….because I would be sitting at a table not far from her, with a small easel of my own, having been allowed to play with her older watercolours.

I spent a lot of time as a child at my grandparents home. And I know I am speaking about Granny here… but I spent more time with Grampie 😛 😉 But the point of telling you about Granny today, is to share a hobby of mine with you.

I am nowhere near as good as Granny, but I love to paint and create 😉 I do a lot of homemade gifts for friends and family… and sometimes even take requests from them to make gifts that they want to pass along to someone else. So I thought that today I would show you some of my stuff, just for fun 😉

Please share with me one hobby that you have 😉

One of my favourite items that I painted is my Cracked Pot. I bought him as a plain old ceramic, and handpainted him. He reminds me of the saying, ”We are all broken – that’s how the light gets in.” I smile every time I look at him 😉 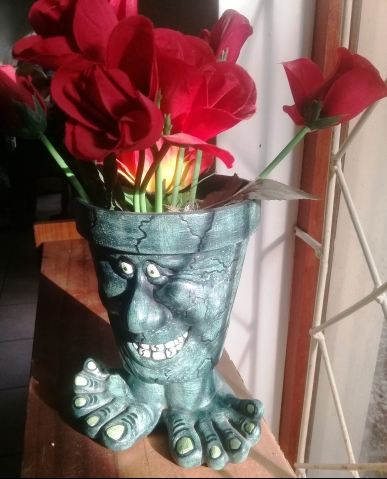 For Christmas, I painted these plain wooden boxes and filled them with treats, and a bottle of wine, as gifts for friends 😉 (handpainted writing – not so great, but it was cherished 😉 ) 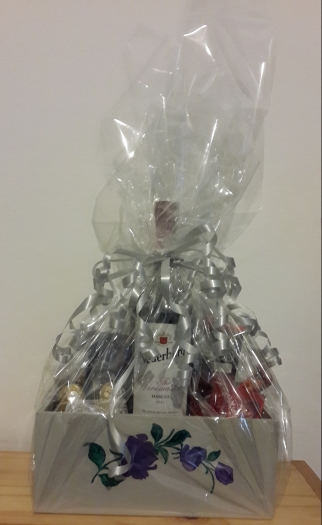 And there’s my frog in my garden… (it’s Autumn here now, and everything is a lot drier than it should be because we have water restrictions too… but he really shines in Spring and Summer when I plant a bunch of purple petunias around him 😉 )

So I’m no great painter.. but it’s something I enjoy 😉
Please remember to share one of your hobbies with me 🙂

No. I don’t eat people.
Eating people is still illegal in South Africa.
Not that anything being considered illegal makes anybody less inclined to do it these days. Even if it was legal, I still don’t think I’d eat people…
But I got the nickname anyway…and here is the tale as to how this ‘little lady’ earned her Purple People Eater stripes.

END_OF_DOCUMENT_TOKEN_TO_BE_REPLACED

I wrote an article recently on how I view my life as a work of Art.

It’s painting, music, books and a dance. It’s messy too.

Please go and take a look at the article

Ah yes, my life is not perfect, but it’s mine.